Hi there! Here’s a post I put together for the Amisk-Hughenden Historical Society all about a lost child and the dream a man had that told him exactly where to find her.

Little nine-year-old Ethel Thorpe, caused a stir in the community that old timers will never forget. July 13, 1915, she and her little dog left as usual about 4 p.m. to bring home the cows. Her family waited, and waited in vain, for her return. It started to rain and her frantic parents, knowing she had on only a light cotton shirt and overalls, lighted a big bonfire on top of a high hill, hoping she would see the light and come to it.

They notified neighbours, who in turn passed on the word that a child was lost and soon the entire countryside from Wainwright to Provost to Hardisty was organized into a huge search party. Men searched on horseback, in buggies and on foot, through rain-soaked brush and trees, through grain fields and rolling prairie thunderstorms encumbered them, they searched doggedly on. But after four days and nights of searching, hopes that she would be found alive were at low ebb.

The morning of July 18th dawned clear. The sun shone brightly for the first time in days. Its warmth and brightness seemed to give renewed vigor to the enormous crowd that turned out to make one final effort to find little Ethel.

Two bachelors, Jim Murphy and John Black, felt confident that today they would find her. They knew just where to look, for Jim Murphy had dreamed a dream that night. In the dream he saw the child and recognized the terrain.

They lost no time in getting started that morning. When they reached the approximate spot of Jim’s dream, he got out of the buggy and said, “I’ll walk around this side of the bush, you drive around the other. She is here somewhere.” And there she was, just as he had known she would be, huddled down in the tall grass with her little dog clutched tightly to her breast.

Ethel’s first impulse on being found was to run and flee. It took a lot of coaxing on the part of the men, one of whom was a friend of the family, before she could be persuaded to go with them. It is thought that through exposure to wet and cold, and the fright of being lost, she had been in a sort of fevered stupor much of the time, for she told of how she would run and hide whenever she saw men or teams approaching.

She had lived on berries and slough water, and no doubt her dog, cuddled close to her, helped keep Ethel warm. A doctor pronounced her quite all right but rather weak after her ordeal.

~ written by Mary Burpee, from The Lantern Years

Regarding The Lantern Years: Buffalo Park to Neutral Hills

The Lantern Years is a book that covers the span of history from 1867-1967 in Hughenden, Amisk, Czar and surrounding districts. The book was compiled and edited by the Hughenden Women’s Institute. In 1967 it was published by Inter-Collegiate Press, Ltd., Winnipeg, Manitoba, and then this Centennial project was marketed and sold.

Here is the first note of appreciation from the front of the book:

The Hughenden Women’s Institute Book Committee wish to express their sincere thanks to the following:

Ester Mellemstrand (our helper from Amisk)

Whenever I’m doing local research, The Lantern Years is often open on my desk as it is right now. This book offers a unique take on the history of this area. The book is a goldmine of stories often told in the voice of the storyteller. There are old photos throughout the book, and an especially good collection in its back pages, including these great pictures:

Here’s another note of appreciation found in the front pages of The Lantern Years from Mrs. H. H. Carson on behalf of the district:

Our sincere appreciation is extended to Mrs. Clarence Burpee, Mrs. L.S. Parke, Mrs. I. Mellemstrand, and Mrs. H.S. Wight for the devotion, time and effort given to the writing and assembly of material for this history so that it might be an authentic record of the pioneers of this district.

A grateful thank you is extended to each and every member of the Hughenden Women’s Institute who have contributed to the history and promoted the sale of books. 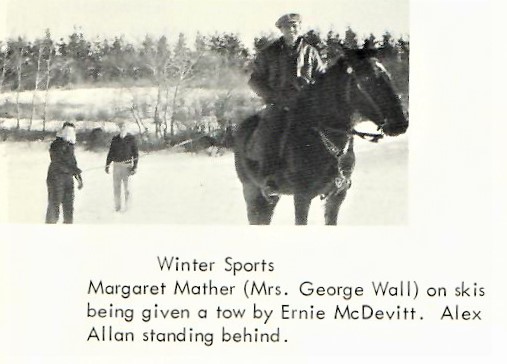 Thanks for dropping by! If you’ve enjoyed this little bit of history, please consider sharing it. Have a really good weekend.