The High Cost of Dying 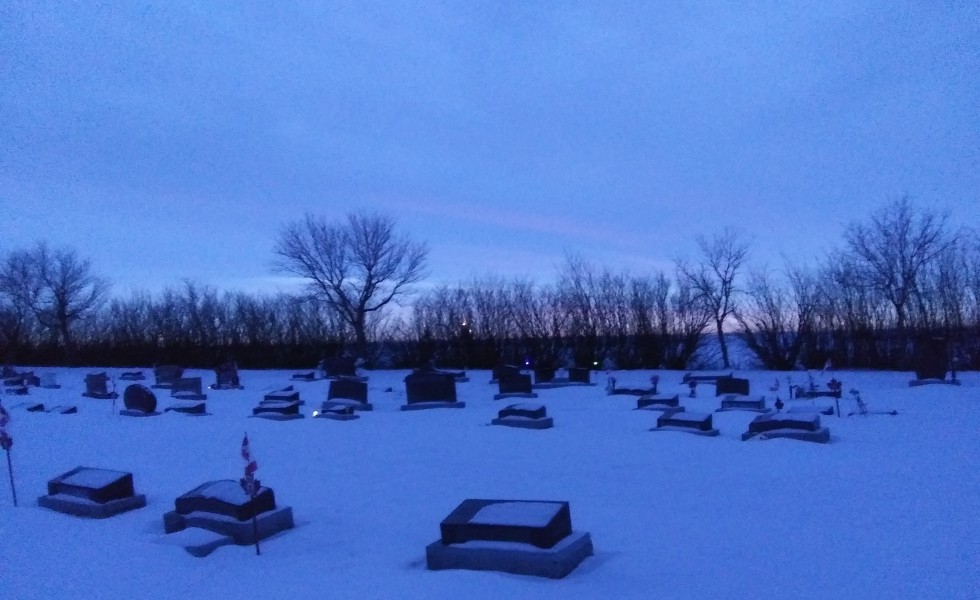 It’s something many of us are curious about, but it’s a difficult topic to find information about and a sensitive subject to bring up. That’s why I brought out the funeral invoice I had on hand and shared the costs with you in this post. In the second part of this blog, I wrote about embalming and cremation, and how I feel like I have very limited options when it comes to dying.

In December of 2018, my father-in-law passed away. He was from Kindersley, Saskatchewan, but had been in the hospital in Saskatoon following an emergency hip replacement operation. That necessary surgery proved to be too much for his 92-year-old body.

The total cost of his memorial was $11,070.00. The funeral home my husband and his sister used is Kindersley Community Funeral Home and Crematorium Inc. Here’s a breakdown of the costs, taken from the funeral invoice, along with an explanation of some of these costs:

My father-in-law’s body needed to be transferred from the University Hospital back to Kindersley, SK. Only ambulances and hearses are permitted by law to transport human remains. The distance between Saskatoon and Kindersley is 200 km. That’s $2.40 a kilometer. An ambulance pick-up and transport within Saskatchewan costs between $245 and $325. I reviewed the provincial government’s website and found no information about the availability of transport of deceased persons by ambulance.

This includes identifying the body as my father-in-law’s and moving his remains from the hospital morgue to the hearse.

I don’t know what this is unless it’s a charge above and beyond the rental of the hearse for the funeral. It could be the cost of bringing the body to the church and then to the cemetery.

This is for the hearse rental for the day of the funeral.

This casket is described on the invoice as the Imperial Casket Ashton Woodbar. A similar casket from Costco is $900, but the substantially cheaper one is made of poplar, not ash, and it is not quite as ornate.

This amount covers opening and closing up the grave. Also, it likely includes the cost of the rough box/grave liner.

My husband’s mother passed away in 2006. At that time, a headstone was engraved and erected. My father-in-law’s date of death needed to be inscribed on the pre-existing stone.

Equipment for Church and Cemetery – $190

The minister of my father-in-law’s church performed the service and the family rented the intimate church hall for the lunch following the funeral.

This seems to be the cost of submitting the obituary to the newspaper and online. I looked up the term “jamac” and found out that it’s an acronym for Joint Aeronautical Materials Activity, but I don’t think that’s what’s being referred to on the invoice.

There was a time on the evening before the funeral during which friends and family could view the displayed body at the funeral home. An attendant from the home was hired to be there. I think the viewing was open for two hours.

Staples lets you create funeral cards and prints them off for you. It costs $158 to print 200 of them.

The cemetery at Kindersley, Saskatchewan in December.

I think there were two people from the funeral home in attendance at the church. The service was half-an-hour long and the burial took about the same length of time.

“In most cases, estate funds can be released to look after funeral accounts, even if there is need for probate. Interest at 1.5% per month will be charged after 30 days (19.6% annual rate).”

The Tradition of Embalming

Human beings have experimented with preserving dead bodies for thousands of years. It was President Abraham Lincoln who made the practice of embalming in North America popular during the American Civil War. Lincoln became acquainted with Dr. Thomas Holmes when, in May of 1861, the doctor offered to embalm the body of Lincoln’s friend and colleague, Colonel  Ellsworth. After that, Dr. Holmes embalmed thousands of Union soldiers’ bodies so that they could be transported back home.

A surgeon embalms a soldier’s body during the Civil War. Everett Historical/Shutterstock.com

On May 24th, 1861, Colonel Elmer Ephraim Ellsworth, a close friend and colleague of President Lincoln, was killed while removing a Confederate flag from a hotel in Virginia. Dr. Holmes went to Lincoln and offered to embalm Colonel Ellsworth’s body, free of charge. The Colonel then lay in state at New York City Hall so soldiers could pay their respects.

~ From Fit For a President: The History of Embalming

Then, in 1865, when Lincoln was assassinated at Ford’s Theatre in Washington, D.C., his body was embalmed and transported by train for public viewings. Here’s a great article written by Brian Walsh, Assistant Professor of Communication Design at Elon University in North Carolina, all about the tradition of embalming and how it has become a part of the funeral industry.

After researching the practice of embalming, I know this for certain: I don’t want it done to me. I have made this very clear to friends and family members. At this point, my only other option is cremation. The average cost of cremation in Alberta ranges from $1,100 to $1,300 with no funeral service. There are, however, less expensive direct cremation options.

Ideally, I would prefer that my body is left alone after I die. I don’t want to be stuffed in a high-heat oven and rapidly burned or have my blood replaced with chemicals. To me, it all seems, at best, undignified and, at worst, gross. Also, the dear folks left to mourn me are also left to pay for all this indignity that I don’t even want.

You know what would be nice? I would really like for my body to be cleaned up, dressed up, and wrapped up in a homemade quilt or placed in a willow basket casket, and buried in the local cemetery. I don’t even need (or desire) an ornate headstone. A natural field stone, large enough to inscribe my name and dates of birth and death on, would be fine by me. But I don’t have a lot of choice. I feel like my inevitable death has been commandeered by the traditional funeral industry.

I like the concept of green burials but not strictly for environmental reasons. Sure, it’s better for all the poisonous chemicals not to leak out of my body and into the soil, but in the sparsely-populated Lakeview Cemetery, my embalming fluid probably won’t make that big a difference. What I like is the decreased cost to my loved ones and the increased dignity to my remains. I’m okay with decomposing naturally like other unpreserved organic material, not like the romaine lettuce and avocado skins in my compost bin.

Thanks for reading and listening! I hope you have a very pleasant weekend wherever you are. ~ Lori